Your Ultimate Guide to Winning at Words With Friends

What is Words With Friends?

Words With Friends is a crossword game made for mobile devices (iPhone, iPad, Android), and is based on the popular board game Scrabble. The basic directions can be found HERE. There are a few key differences between Words With Friends and Scrabble that I’d like to point out. It’s important to recognize these differences because you might be able to use them to your advantage.

Because of some of the new dynamics mentioned above, the friends that I play with regularly and I have agreed to a few rule clarifications for ease of play. First, we are allowed to keep a list of all 2 letter words. Since we are able to use trial and error to find words, it saves a ton of time to know what all the two-letter words are. If you use a list long enough, you will probably end up memorizing it anyway.

Sometimes the makers of Words with Friends add and delete words from its dictionary. Click over to my article 2 Letter Words For Scrabble and Words With Friends to view an updated (2020) list of two-letter words.

Second, we have deemed it acceptable to keep track of the missing tiles if we like – much like counting cards in Blackjack. We figure that since there can be a relatively large amount of time between turns, why not use the time to keep track of what tiles have and have not been played yet. None of us ever really do this early in a game, or even in the middle. But as the game is nearing the end and it looks like it could be particularly close, we will definitely do it. I’m not sure if there is a rule that addresses this in regular Scrabble, but we’ve made it clear that it’s ok here. I put together a spreadsheet that takes care of this for me. Click the link below and you can use it too! You will need at least Microsoft Excel 97 to use the spreadsheet.

It’s a good thing to agree on a few ground rules with the friends you play with regularly. In my group of friends, we have deemed it acceptable to keep the two-letter word list and keep track of tiles if we want, but NOT acceptable to use Words With Friends cheats, word generators or any other word lists, which are readily available online. If you and your friends agree that it’s ok to use word generators, my favorite one is wineverygame.com. I’m sure there are plenty of other good ones.

As I said before, in the time that I’ve been playing, I’ve developed some of my own Words With Friends tips and strategy that I will share with you here. Hopefully it will give you an edge against your opponents as well.

Lay *Along* Beats Lay Across

Let’s say your opponent plays AROSE. You have letters in your tray that spell “POWER”. You could use the “O” in AROSE and lay the P, W, E and R downward across it, for a cool 11 points…OR…you could you could lay POWER along the top of AROSE to create multiple new words (POWER, PA, OR, WO, ES, and RE) for a total of 26 points!

It never fails, you play a 5 letter word to start the game, and your experienced opponent puts a nice lay-along next to it, effectively scoring double for his word and single for YOUR word too. When I start a game, I like to start with a 2 letter word, and use that turn to dump my two least desirable letters. Let your opponent be the first to open the board up.

The best way to maximize the value of your tiles is to play them on the colored squares. On the board, you can find Double Letter (DL), Double Word (DW), Triple Letter (TL), and Triple Word (TW). I like to call the TL and TW the “High-Dollar” Squares. Always look for the accessibility of these squares on the board – even before you examine your tray. Look for plays using these squares and try to work your letters to fit those plays. Even better, try and find plays that combine multiple letter scores with multiple word scores. Let’s say you play the word PARK on 4 Blank squares. You will score 11 points. Now let’s say you play where the “P” is on a TL and the “K” is on a TW. The score for this play will jump all the way up to 57 points!

Look for Vowels Next to Colored Squares.

Let’s say your opponent plays PLANE, and there is a TL directly above the “A”. You notice this, then upon examining your tray you notice that you have a “Z”. Remembering from the 2 letter word list that ZA is a valid word, you know you can play the “Z” on the TL, to create ZA for a total score of 31 points. Now you take it one step further and notice that you also have an “E” and an “N” in your tray. Now you can play ZEN in a lay-along above PLANE, creating ZA, ZEN, EN and NE, for a total of 70 points!

Bingo Was His Name-O

When you play all 7 tiles in your tray in one turn, it’s called a “Bingo.” Not only do you get the points for the word(s) you made, but you also get a 35 point bonus! If you can mix that with a few colored squares in the right places, then it’s not out of the question to score in the 100’s on one single play! One of the keys to winning games consistently is learning how to make Bingos. It takes a bit of practice, but the more you play, the more you will develop strategies that will help you create more and more Bingos. When I first started playing, I was lucky to average one Bingo for every 10 games played. Now I’d say I average about 9 Bingos for every 10 games, and I’m continuing to improve. Read on for some of my strategies for creating Bingos.

Just as you will be looking for plays around the High-Dollar squares, your experienced opponent will be doing the same. Don’t give him the opening, even if it means you have to play a lesser word elsewhere. Unless I know I’m going to score big with my play, I generally try to avoid opening the TW TL areas for play. Even a 40 point play might not be worth opening up one of those areas, knowing that he could potentially score 50 or even more points by taking full advantage of the opening.

S’s are Precious. And so are BLANKs

The “S” and the BLANK are important tiles in the game. The “S” is important because it can be played at the end of so many words. If you have a word in your tray that contains an “S”, then you can place it at the end of a word that is already on the board, and play the remaining tiles for your word around it. Let’s say your opponent played COFFEE. In your tray you notice the word VEST. You could play VEST across one of the E’s in COFFEE, for a total of 8 points. I consider this to be wasting your S. If you look closer, you could put the S at the end of COFFEE and play the V, E and T around it, and score 24 points, with COFFEES and VEST! Mix in a few colored squares and you can easily clear 30 points.

Many people like to employ this strategy with the “Y” as well. I personally find that there aren’t nearly as many opportunities to use the “Y” in this way as there are for the “S”, so I generally treat the “Y” as just another letter. The BLANKS can work in the same way. Not only can you use them as an “S” to connect two words, but you can also use them as the missing link for a word you are working on in your tray. I’d say the BLANK is responsible for about 50% of all the Bingos I make. As a general rule of thumb, I try not to use an S or a BLANK unless they are directly responsible for scoring at least 30 points for me.

Swapping Tiles: All or Nothing

Swapping tiles is an art. Generally speaking, I swap tiles when there are no plays that I can make that will get me more than 15 or so points, and the letters in my tray don’t figure to offer any more help in the near future. Never try to swap tiles in order to create a word that you are trying to formulate in your tray. That will only lead to heartache, trust me. When I need to swap, I like to swap ALL 7 tiles, with a few exceptions: I never swap out the following letters:

S: See above
BLANK: See above
J, Q, X, and Z: these tiles are crucial in determining the winner. Never give them up if you have them. Giving them up gives your opponent a chance to use them with the colored squares for maximum value. I’d rather play one of those tiles on a blank square just to get rid of it before I see my opponent take advantage of it on the High-Dollar squares.
“ER” or “ED”: I’m a big fan of ER and ED. These combinations are very versatile in that they can be attached to the beginning or end of many 5 letter words, to make a Bingo. I would say that those two combinations are responsible for helping me with the other 50% of my Bingos.

A high tile turnover rate is good for your tray. It increases the chance of getting J, Q, X and Z, and decreases your opponent’s chance of getting them and using them against you. If all other variables are equal (points, leave, etc.), play the bigger word over the smaller word if you have a choice.

It’s generally not a good idea to save letters while you wait on other letters to show up for a word. I’m not going to lie and say that I’ve never done it, but I do try and keep it at a minimum. Sometimes it is just too tempting. Obviously you have the best chances of a good score when you have all seven letters to choose from on each turn. For each letter that you hold back, you are potentially limiting your score for that play. If you do choose to save letters, try and keep it at a minimum, and if the letters you need don’t show up within 2 or 3 turns, cut your losses and stop waiting.

It’s important to know the two-letter words because they can be used in a pinch, or as a connector to a much larger word. For reference, I’ve written an article that I like to call The Ultimate 2 Letter Words List 🙂 (updated in 2020).

Hopefully you found these Words With Friends tips useful. I’ll continue to make additions/changes to this document as my strategy and skill level evolves. Let me know if you disagree with anything I said, or if you find any errors. 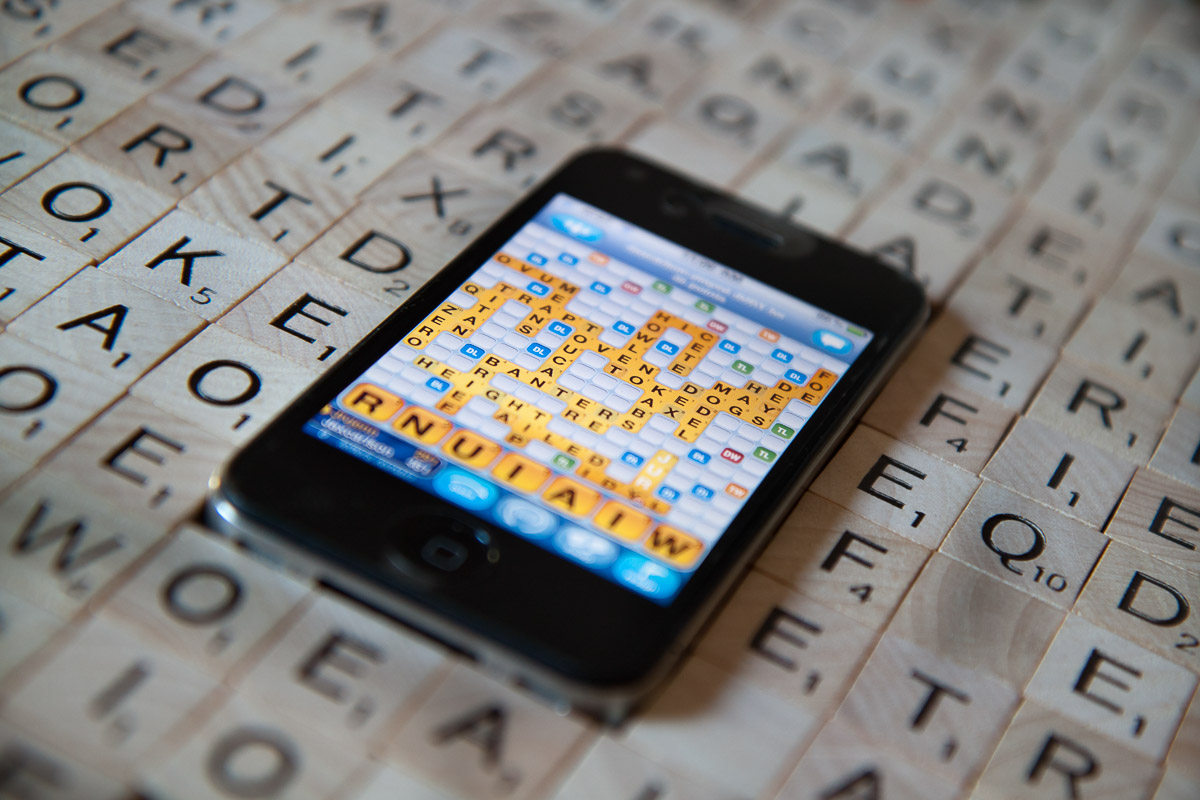 
30 thoughts on “Words With Friends Tips and Strategy”