02/08/2010 at 4:14 am – “Waterway to Orbit” – Space Shuttle Endeavour STS-130 launches into orbit toward the east, as the stars and waning crescent moon trail toward the west, leaving a beautiful reflection on the Intracoastal Waterway in Ponte Vedra, Florida. This 132-second time exposure of the final night launch of a Space Shuttle, from launch through SRB separation, was taken 115 miles north of Launch Pad 39A at Kennedy Space Center.

This photo is one that is very special to me, mainly because of the years (literally years) that I spent conceiving, planning, failing, and ultimately executing it even better than I envisioned it. While I’d like to think I’ve made some other pretty solid images over the years, this is the one that keeps coming back and the one that I always manage to run into while browsing on the internet.

Shortly after I made the image, Waterway to Orbit was featured as NASA’s Astronomy Picture of the Day and in Air & Space Smithsonian Magazine. The following year it was selected as an honorable mention in National Geographic’s Annual Photography Contest. It was also used by NASA as an element in their Space Shuttle Endeavour orbiter tribute image.

Over the years I’ve received hundreds of emails from people all around the world, to ask questions, or congratulate me, or to just tell me how much they love the photo. It’s been very gratifying and humbling to know how an image I made with my camera has spoken to so many people around the world.

I wanted to use this space to answer a few questions that have been emailed to me and that I have found on the web. If you have further questions or comments, please feel free to contact me or leave a comment on this page.

What type of camera did you use and what were your settings for this picture?

Is this photo available for purchase?

Currently I don’t have it up for sale on any of my online presences, but if you would like a copy, you can contact me directly.

Is it ok if I post the photo on my blog or in a user forum?

You can post on your blog or a forum as long as you don’t profit from my photo. I only require that you do the following three things:

Are you interested in licensing it for commercial projects?

Have you altered the photo in any way? Also how much post-production editing did you do to adjust the colors, etc.

I did not alter the content of the image at all. Really the only thing I did was some slight adjustments to white balance, exposure, clarity, vibrance, contrast and some dodging/burning in Adobe Lightroom.

Incredible shot. How much of that was pure luck or great planning?

I have always heard that in photography, the more planning you do, the more you get lucky. I had photographed 2 shuttle launches and 2 rocket launches from the Jacksonville/Ponte Vedra area before shooting this one, and two from the same bridge, so there were a few things I knew to expect. Also, I had a general idea of where to stand on the bridge to see the shuttle rise from the vanishing point of the Intracoastal Waterway. The luck came into play with the fact that is was such a clear night and because I overslept and only had 7 minutes to prepare when I got there. 🙂

I noticed a strange pinkish smudge on the APOD image that seems to have about the same smear direction as the stars, but not as long. Can you say what that thing is below the two fainter stars in this clip from your photo? I suppose it might be Mars? But then why the difference in length?

After looking closely at the pinkish smudge, I’ve determined that it is some light flare, reflecting from the moon. Check out the photo below for a higher-res photo of the moon (darkened for clarity) and the flare, side by side. You can see they have the exact shape. I considered removing it from the photo but ultimately decided to leave it since I had done nothing else to alter the photo.

Interesting that the stars “moved” a little due to the open shutter/time lapse method, but why would the MOON not do the same thing??? Why is the rocket’s actual path heading NE….100’s of miles NE toward Spain which was the actual path for emergency ditching/landing…and the reflection kept going straight north up the ICW…..toward the Palm Valley Bridge it appears..???? The reflection should be UNDER the path of the rocket eventually, and therefore, would it not be out over the ocean?? Beautiful anyway, but I am less convinced that it is real…..???

As far as the question about the reflection is concerned, my original answer was “I don’t know”, however Michael Scott (of Johnson Space Center, not Dunder Mifflin 🙂 ) has emailed me with the best answer I’ve heard so far. Here it is:

“I think it’s due primarily to two things – that the Shuttle is climbing to extremely high altitude and that you are so far from it. If this were an airliner flying the same direction as the Shuttle (43 degree constant azimuth), at the same distance from you, it would be very low on the horizon, mostly not visible in the waterway, and its flight would appear linear and not an arc like the Shuttle. People often compare how the Shuttle flies to more familiar vehicles like airplanes, but they are very different in many ways.”

I’ve been receiving many questions similar to the one about the moon, either asking why the moon did not move in the same way the stars did, or why the photo shows a full moon when the last full moon was January 30. Check out the photo above to see the moon at full res, exactly as it is in the photo, and then darkened for clarity right next to it. As you can see, the moon was actually in the waning crescent moon phase and it “moved” as much as the stars did. It’s just a coincidence that it looks full in the lower res version of this photo at the top of this page.

I’ll find the picture again with Google, somehow track down the guy who took the photo, and let him know his camera sucks.

I just had to post this one because it entertained me. 🙂 I’m pretty sure it had to do with the low resolution available. I used a Canon EOS Rebel T1i to shoot the photo. It’s far from a pro level camera but plenty capable of producing great images.

Congratulations on a beautifully composed shot. Technically excellent. Only question in my mind is “elevation”, this does not appear to have ben taken off the bridge at road height. I’m intrigued.

The Intracoastal Waterway Bridge in Ponte Vedra is higher than you might imagine for being in a predominantly residential area. You can see a photo of it here

Are you available for hire?

I love photographing sports and events. If you are in the Jacksonville/St. Augustine area, click here for my services and pricing.

Thanks again for all of your nice comments. If you have further questions, please don’t hesitate to contact me. 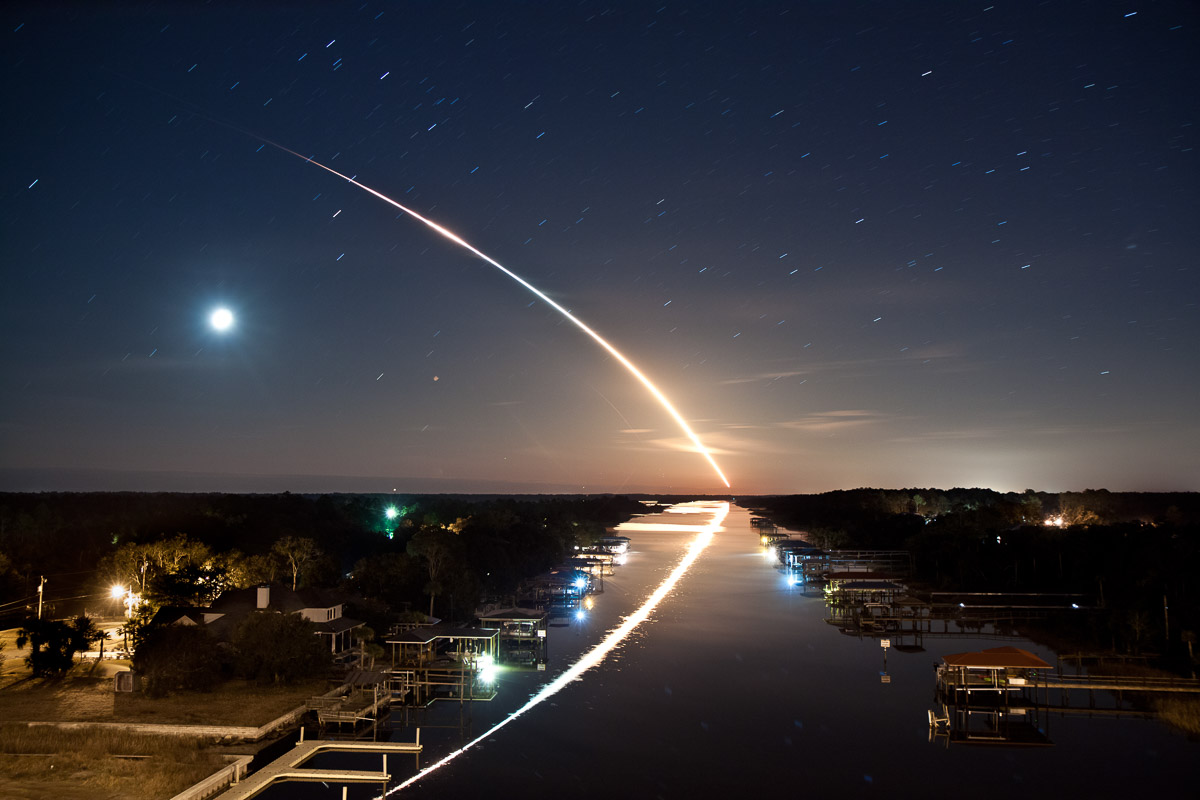 
6 thoughts on “Waterway To Orbit”